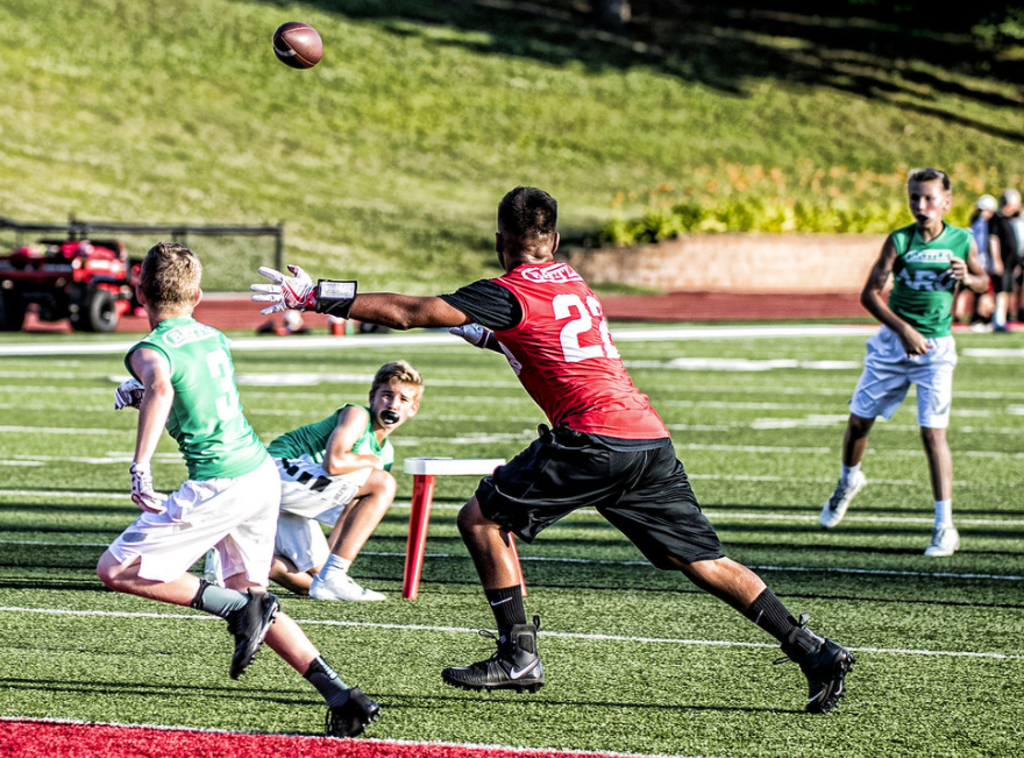 Summer 7-on-7 football for high school-aged athletes has been around the Omaha area, in some form, for a number of years. But until this summer, it never really existed for players of younger age groups.

Brothers Eric and Kyle Crouch have long talked about the need for it, feeling skill players in the area weren’t getting the same offseason opportunities to develop as those in the football hotbeds in the South and on the coasts. Last month, they brought 7-on-7 youth football to Omaha for the first time.

ARQ, which stands for American quarterback and receiver, wrapped up its inaugural five-week season on Friday with an evening of postseason play at Westside’s Phelps Field. Twelve teams — four from the fifth and sixth grades and eight of junior high-aged players — competed in the league’s pilot campaign.

The founders have been excited and encouraged by the venture.

“It’s here to stay, for sure,” Kyle Crouch said. “All the feedback has been very, very positive. I’m really impressed with how much better the teams have gotten. You just don’t really know until you know. But the kids are very competitive. They want to win. They want to get better, and they have gotten better.”

ARQ games are 25 minutes long and two are played simultaneously, one at each end of the playing surface. Offenses start with the ball at the 40-yard line and drive toward the end zone. After a defensive stop or a score, it’s the other team’s turn. There is no tackling. A two-hand touch is needed for a stop.

Every player on the field is an eligible receiver in the predominantly passing game, and plays take place at a brisk pace. With two games going at once, as music plays in the background, the action is nonstop.

“It’s a really special atmosphere that we have, and we take pride in it,” Eric Crouch said. “We spend a lot of time with it, and we care about it. And I think the parents and the coaches all know that.”

The 2001 Heisman Trophy winner from Nebraska and his younger brother have long been involved with youth football. They helped build the program in Elkhorn, and Kyle has been on the board for the Metro Youth Football League — which boasts more than 100 teams in the area — since its inception.

“We had the connections to steer us in the right direction from the get-go so it came together pretty quickly,” Kyle Crouch said. “We knew how to do it. No one else was doing it. And we wanted to do it.”

The Crouches leaned on the experiences of Chris Circo of Battle, the Omaha-based sports science and apparel company, who has been involved in numerous other 7-on-7 endeavors throughout the nation. And Eric met with Shawn Smith, the founder of Texas Elite 7on7 Football, while on a trip to Texas.

“I spent some time with him consulting about how he runs his league,” Crouch said.

Other than a spot of rainy weather, the initial ARQ season went as smoothly as could be expected.

But the Crouches said this was only the beginning. They expect their league to explode in the future.

“I think we’re going to need three fields,” Eric Crouch said. “I’ve got a feeling we’re going to get to around 36 teams pretty easily, especially when we open it up and take individual sign-ups. This year, we took team sign-ups, and I think that held us back a little bit. We did that because we weren’t sure how it was going to work for us. Texas takes individual registrations. We just wanted to get it off the ground. That was the first step, and that was very important. The next step is making adjustments for next year.”

Kyle Crouch expects to include third- and fourth-graders in ARQ in the future. And the founders foresee ARQ holding various skill-position challenges, a state tournament and, perhaps, a 5-on-5 lineman league.

Eric Crouch said the goal is using the summer to develop player skills that will eventually lead youngsters to be ahead of the game once they reach the high-school level and get into their fall football seasons.

“Football has been crushed into a three-month period forever. And we’ve never been able to break outside of that and really develop the player,” he said. “In those three months, we’re worried about putting in an offense and running plays, but we can’t really teach the position. We want to be a place that starts to develop those skills, whether it’s a quarterback camp, lineman camp, defensive back challenges, receiver competitions — fun things that we can do that will gain popularity. It’s about whether kids have fun now. If they’re not having fun playing, then typically they’ll quit and go do something else.”

In late June, The World-Herald 7v7 State Championship drew 38 high school teams to two sites in the Omaha area. The tournament was won by Aurora High, a Class B school.

The elder Crouch was recruited out of Millard North as a quarterback. But in recent years, he’s seen a number of skill-position players in the area under-recruited as colleges turn to the South and both coasts in search of talent. He believes leagues such as ARQ can level the playing field for them.

“We’ve got a lot of talent here in the Midwest. I mean a lot,” he said. “Being from here, I’ve seen it. I really think there’s a lot of talent. It just needs to be developed properly. Kids need to start doing things at a younger age more specific to their position. If you’re just learning that in high school, there’s less of a chance that you’re going to be provided an opportunity to start in high school and the opportunity to maybe get a scholarship offer because you’re a better player and you’re helping your team out more.

“We really want to develop the skill position (players) and really give those kids an opportunity to really make a difference in their high school — and the colleges they’ll soon be getting scholarship offers to.”

The long-term impact of ARQ won’t be distinguishable for a while.

“We’re about 10 years behind other places with football in 7-on-7,” Kyle Crouch said. “We just said, ‘We’re just going to do it.’ And we’re going to continue to grow it and make it as legitimate as other areas.”